June 14, 2021
Trending
Home Uncategorised Why 5G, a battleground for US and China, is also a military conflict – South China Morning Post

Apart from its tremendous commercial benefits, 5G – the fifth generation of mobile communication – is revolutionising military and security technology, which is partly why it has become a focal point in the United States’ efforts to contain China’s rise as a tech power and its allegations against Chinese companies.

The future landscape of warfare and cybersecurity could be fundamentally changed by 5G. But experts say 5G is more susceptible to hacking than previous networks, at a time of rising security concerns and US-China tensions on various interconnected fronts that include trade, influence in the Asia-Pacific region and technological rivalry.

Long before the Chinese company was indicted in the US this week on multiple charges including stealing trade secrets and violating US sanctions – charges it denies – US intelligence voiced concerns that Huawei’s telecommunications equipment could contain “back doors” for Chinese espionage.

Huawei has repeatedly denied these allegations, but the controversies have underlined 5G’s growing importance and stepped up the technological arms race between China and the US.

To most people, the next-generation networks, which will be at least 20 times faster than the most advanced networks today, may just mean faster downloads of movies or smoother streaming. But they have much bigger potential than that.

Whereas existing networks connect people to people, the next generation will connect a vast network of sensors, robots and autonomous vehicles through sophisticated artificial intelligence.

The so-called internet of things will allow objects to “communicate” with each other by exchanging vast volumes of data in real time, and without human intervention.

5G explainer: how new network is different and how it will change the mobile web experience

Autonomous factories, long-distance surgery or robots preparing your breakfast – things that previously existed only in science fiction – will be made possible.

Meanwhile, though, it is being identified by many military experts as the cornerstone of future military technology.

Imagine a group of skirmishers in a jungle. They are moving forward speedily with a distance from one another of a few hundred metres. Each of them wears a wristwatch that displays fellow members’ positions. This is not satellite positioning, because reception in the tropical forest is unstable; it’s machine-to-machine communication.

China could ‘weaponise cities’ if it controlled 5G networks, retired US general says

Suddenly one soldier, ambushed by an enemy combatant, is shot and loses consciousness. His smart wearable device detects his condition via sensors, immediately tightens a belt around his wounded thigh, injects an adrenaline shot and sends an emergency alert to the field hospital as well as the entire team.

Having received the signal on their wristwatches, the team switch to a coordinated combat formation and encircle the enemy. An ambulance helicopter arrives to evacuate the injured soldier while auto-driven armoured vehicles come to reinforce – guided by devices on each soldier and antenna arrays nearby.

Or, imagine a street battle with a group of terrorists in a city. There is a power blackout and terrorists hide in an empty office building. A counterterrorism technician hacks into the building’s audio control system and collects high-sensitivity soundwaves using the microphones on surveillance cameras – the system is still running thanks to the devices’ low power consumption and long endurance.

After the acoustic data is sent back, artificial intelligence (AI) analysis determines the locations of the terrorists. A drone is called from nearby, enters through a window and fires a mini-gun at them.

These are not movie plots, but technologies already or about to be developed, as the internet of things – built on 5G and AI technologies – reshapes warfare.

“The 5G network and the internet of things enlarge and deepen the cognition of situations in the battlefield by several orders of magnitude and produce gigantic amounts of data, requiring AI to analyse and even issue commands,” said Dr Clark Shu, an AI and telecommunication researcher at the University of Electronic Science and Technology of China.

With the ability to carry much more data, much lower network latency (network response time) and energy consumption and much better stability than the previous generation of technologies, 5G is expected to transform digital communication.

Using 5G, data can be transmitted at up to 10 gigabytes per second, much faster than using a 4G network, and the latency is reduced to under a millisecond, or 1 per cent that of 4G.

Such features enhance connectivity in remote locations, connect sensors and robots, and will enable vehicles, traffic control, factories and construction to become more autonomous. In particular, 5G will enhance the connectivity of the internet of things (IoT).

“Internet of things involves close-range telecommunications technology to connect and exchange information between two devices, and 5G is the fastest data transmission method to realise it,” said Zhou Zhaoxiong, a senior engineer at China Mobile IoT Company, a subsidiary of China Mobile.

Military equipment embedded with communication devices can also form the internet of things, he added. The communication can take place from device to device, without satellites or early-warning planes, saving those limited resources for other uses and significantly lowering the cost of a military operation, according to a 2017 report in China Defence News, a mouthpiece of China’s People’s Liberation Army (PLA). 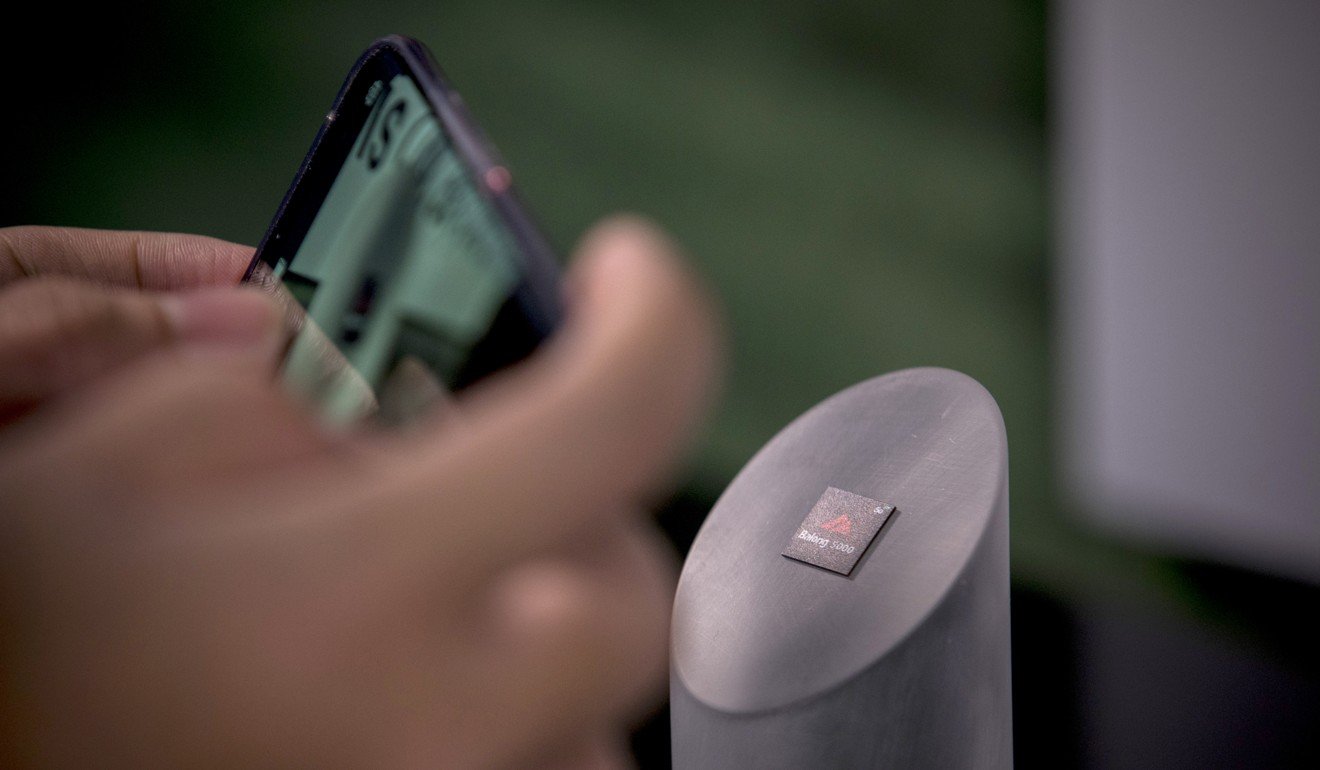 China has been one of the powerhouses in research and development of 5G technologies. Its telecoms operators have said they will begin to introduce commercial 5G networks from 2020, although Zhou said this would involve only regional pilot schemes because 5G devices are still quite expensive for mass commercial use.

Last week, Huawei launched a chip that it claimed to be the world’s most powerful 5G modem.

Then came the US Justice Department’s 13-count indictment on Monday against the Chinese company, its affiliates and its chief financial officer Sabrina Meng Wanzhou, following the arrest of Meng in Canada on December 1 at the US’ request.

But questions over the 5G technology made by Huawei and other Chinese firms date back further. In 2012, the US House Intelligence Committee released a report alleging Chinese telecoms equipment makers posed a threat to national security because of their relationship with the Chinese government. China’s 2017 National Intelligence Law asks Chinese companies to cooperate for national intelligence purposes when necessary.

The US has lobbied its allies to ban Huawei from building their next generation of mobile phone networks, and countries such as Britain, Germany, Australia, New Zealand and Canada have either banned Huawei or are reviewing whether to do so.

Huawei’s founder Ren Zhengfei – Meng’s father – is a former PLA engineer, which has further fuelled questions in the West about Huawei’s ties to the Chinese army and government.

But Huawei executives have asked repeatedly, in vain, for evidence of “back doors” in its equipment. BIS, the German internet security watchdog, inspected Huawei labs in Germany and found no evidence, and The New York Times last week quoted American officials as saying that the case against the company had “no smoking gun – just a heightened concern about the firm’s rising technological dominance”.

Moves by the US and its allies to block Huawei from 5G networks on national security grounds were last month described as a “concerted strategy” by Kevin Allison, of US-headquartered political risk consultancy Eurasia Group, talking to US broadcaster CNBC.

A report last year to the White House by the US’ National Security Council called for action and strategy to “protect US technology leadership” and prevent China challenging US dominance in tech.

“For example, branches of the China Electronics Technology Group Corporation, which makes military radars and other electronic systems, are focused in this area,” said Song.

The US, too, has been investing in military use of 5G, while prototype 5G networks for civilian use have been launched in some cities.

In a recent interview with military technologies publication C4ISRNET, Brent Upson, a director at American aerospace and security company Lockheed Martin, predicted machine-to-machine communication, using information from several sources to form a unified picture of battlespaces, and AI-assisted decision-making would be among the trends in 2019.

But commercial 5G networks are regarded by the US government as easy prey for foreign intelligence agents and hackers, and such concerns are heightened where a military network is subject to hacking and intrusion attempts by adversaries.

“The biggest disadvantage of a 5G network in the battlefield is the vulnerability to electromagnetic interference – and hacking and intrusion,” said Shu.

“The significant increase in sensors and data nodes means an increase of exposure, and an increased risk of being attacked.”