The Chinese government doesn’t often talk about the Tiananmen crackdown that shook Beijing 30 years ago this week. When reporters ask about it, Beijing officials often divert the conversation to the economic boom China has experienced since 1989.

Several hundred or perhaps thousands of Chinese pro-democracy protesters were killed at Tiananmen Square in 1989, according to various independent estimates.They were attacked by Chinese troops — some of them deployed in columns of tanks.

People’s Liberation Army Senior Colonel Zhou Bo this week said there was “nothing wrong” with China’s crackdown on protests 30 years ago — and he cited the country’s economic prosperity since then as evidence of Beijing’s proper course.

“Look at China after this incident. China has prospered,” he told CNBC’s Sri Jegarajah in a wide-ranging interview. “China, the Chinese people’s living standards are much higher. And we did do the right thing. There’s nothing wrong with it.”

Zhou provided no evidence of a link between economic prosperity and the events of June 4, 1989. But setting aside the human cost of 1989, anyone who wants to understand the new, global assertiveness from Beijing would be well served to look at the economic changes Zhou mentioned.

Below are four charts that illustrate them.

In 30 years, China has morphed from having a primarily agrarian population to a nation of city dwellers. This has come about in tandem with the consolidation of a once diverse, small-farm agricultural tradition, and a boom in the number of migrants who have settled in the country’s economic centers.

And those cities have seen their gross domestic products explode. Thirty years ago, Shenzhen was small town. Today, it’s a technology hub and one of China’s most economically potent cities.

In 2017, Shanghai and Beijing remained first and second, but Shenzhen climbed into third place. In addition to favorable government policies, Shenzhen has benefited from its proximity to local factories and the financial center of Hong Kong. The city hosts Chinese technology giants including Huawei and Tencent.

The United States and China are now more than a year into a trade war that has cost both economies and disrupted global commerce.

There are early signs that other nations — Vietnam, India, Chile, France and Germany, among others — are benefiting as importers in China and the United States try to sidestep tariffs by seeking out products from third countries.

But shifting production to new factories (and new farms) hardly makes a dent in the overall trade volume generated by the world’s two biggest economies. The interactive graphic below gives a detailed view of trade relationships over recent years for China and the United States.

Selfie-taking Chinese tourists are a common site worldwide today. Three decades ago, in the immediate aftermath of Tiananmen Square, the coming boom in outbound travel was just a faint glint on the horizon. 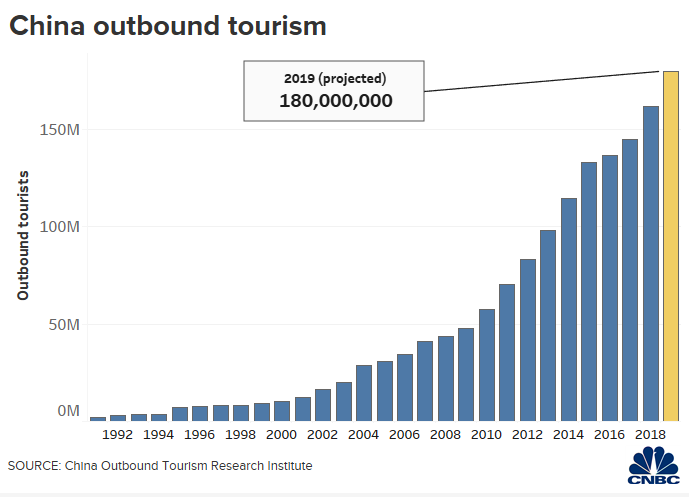 The Hamburg, Germany-based China Outbound Tourism Research Institute, or COTRI, forecasts that 180 million Chinese will travel overseas in 2019. Back in 1991, the figure was 2.13 million.

In 1989, the country was already a decade into a landmark opening of its economy that political leaders launched at the end of 1978.

And while GDP was growing then, average Chinese were by no means wealthy. Strict controls on overseas travel, meanwhile, meant glimpses of Mount Fuji or the Statue of Liberty were still largely confined to books, magazines and TV shows.

Wolfgang Georg Arlt, COTRI’s director, said no reliable numbers are available for the years 1989 and 1990.

“But as China was shunned by the global community after Tiananmen in June 1989 — and, anyway, China had almost no hard currency reserves — the number of departures was clearly below two million, maybe even below one million,” he told CNBC in an email.

But GDP growth rebounded to 9.3 percent in 1991, beginning a long run of annual expansions, sometimes in double digits. Those eventually sent China leapfrogging over the likes of Canada, Italy, Britain, France, Germany and Japan to become the world’s second-largest economy.

Only the United States remains bigger.