A photo recently shared on social media shows the extent of China’s naval modernization effort. The picture, taken from a commercial airliner, shows off no less than nine destroyers and cruisers, plus an aircraft carrier under construction, hovercraft for amphibious ships, and even a missile-tracking ship. The assemblage of naval might shows off just a small portion of today’s growing People’s Liberation Army Navy.

The photograph was shared to Twitter by @loongnaval and was apparently taken by a passenger on a commercial airplane traveling in or out of Shanghai. The photo is of the Jiangnan Shipyards on Changxing Island at the mouth of the Yangtze River. As naval analyst H.I. Sutton points out at Forbes: 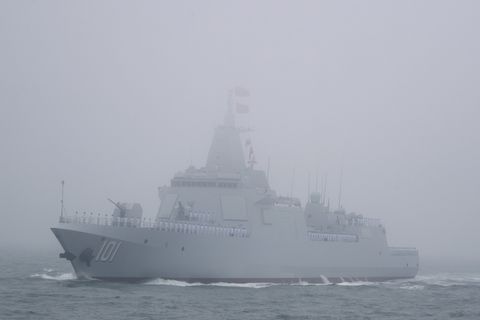 The Type 055 “Renhai” class is considerably larger than the Type 052D destroyers, displacing an estimated 10,000 tons and equipped with at least 100 vertical launch missile silos. The ships are sufficiently big that the Pentagon’s 2019 China Military Power Report refers to them as cruisers, a step up in size and armament and equivalent to the U.S. Navy’s Ticonderoga-class cruisers. Only three countries, the U.S., Russia, and China, sail cruiser-sized ships. 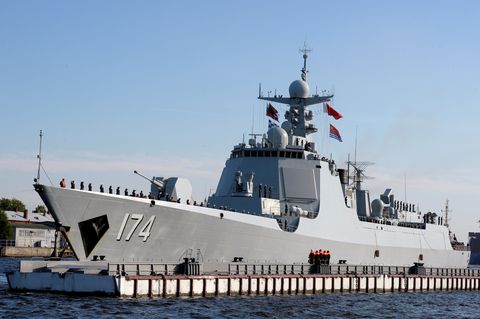 Yet another impressive side to the picture: evidence of China’s latest aircraft carrier under construction. Tentatively known as Type 003, the flat top will be the PLAN’s third carrier. The ship will be larger than previous ships and will reportedly include an electromagnetic aircraft launch system similar to that on the new USS Gerald R. Ford.

The Chinese Navy currently numbers about 400 ships, making it the largest in Asia. That’s not news: for decades the PLAN has had hundreds of ships, torpedo boats, missile boats, frigates, and destroyers, all obsolete and lacking the latest technology. Although large, the PLAN was largely a defensive navy meant to protect China’s coastline—and not much else. 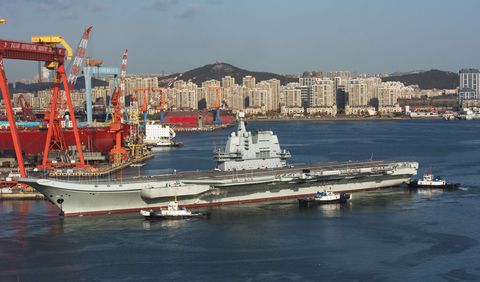 Now, after 30 years of military buildup, the world faces a new Chinese Navy. China’s warships are now much, much bigger and include ships like the Type 002 aircraft carrier, Type 055 cruiser, and Type 071 amphibious landing ship. The new PLAN is also what is called a “blue water” fleet, capable of venturing far from China to sail the oceans of the world.

Could the Chinese Navy become a threat to the U.S. Navy? The U.S. Navy has 298 warships, making it smaller than the Chinese Navy, but that includes 11 nuclear-powered aircraft carriers. Ship for ship, America’s Navy is larger and more powerful.

Still, China is catching up. According to the International Institute for Strategic Studies, “between 2015 and 2017, China launched almost 400,000 tonnes of naval vessels, about twice the output of U.S. shipyards in that period.” It’s not unrealistic to think that the Chinese Navy could someday rival the U.S. Navy’s Pacific Fleet, and if the Jiangnan Shipyards are any indication, that day could come sooner than we think.