In the latest development in the ongoing border tensions between India and China at the Line of Actual Control (LAC) in eastern Ladakh, both the countries have arrived at a “mutual consensus” to disengage on their disputed eastern Ladakh boundary, Army sources said on Tuesday after detailed talks between Corps Commanders on Monday. In the week since the India-China clash, a conspicuous feature has been the silence of China’s ‘all-weather friend’ and economic dependent Pakistan. However, it has emerged that India’s western neighbour has been surreptitiously involved in a plot at its end.

Since the past two weeks, cyber warfare by China has been taking place on the Indian websites and it has been revealed that a lot of that ‘Anti-India’ and ‘Pro-China’ activity and propaganda that has been pushed has a Pakistani role as well. A recent report has observed that there has been a lot of ‘retweets’ of pro-Chinese tweets and many Pakistani handles have changed their names and have been tweeting in Chinese.

Many old videos and images are being used by several groups backed by ISI to spread their anti-India propaganda.

A report by Technisanct — a cybersecurity data firm based out of Kochi – compiled with help of open-source intelligence by a team of analysts states that a war is being waged side-by-side on the Twitter and Telegram. The Chinese narrative is highly backed by the dedicated Intelligence agencies of Pakistan. There are multiple groups which belong to Pakistan where they use fake handles to trend against India, especially on Twitter where a lot of the narrative is spun.

The analysts monitored around 500 Twitter accounts which are used by Pakistani groups that propagate and operate more and more campaigns against India. The report says that these fake accounts sport Pakistani and Chinese flags in their handles, and a bio to create a feeling that Pakistan is highly backed by Chinese.

Here are a few examples of the fake narratives propagated by these accounts:

‘China studies each nation & their activities’

The report states that Chinese ways of operations are always popular for spreading propaganda. “They make it and fake it until they achieve their objective. They study each nation and their activities. Similarly, they have learned well about the Indian digital networks that speak for and against the government, and have understood the opposition systems which can gather more popularity among a group where the disagreement lies,” it says.

“This is what they did in Hong Kong as well. In the same way, with aid of Pakistan, they are building out a massive disinformation network,” it adds. Twitter is banned in China, except for those it uses to peddle its propaganda. 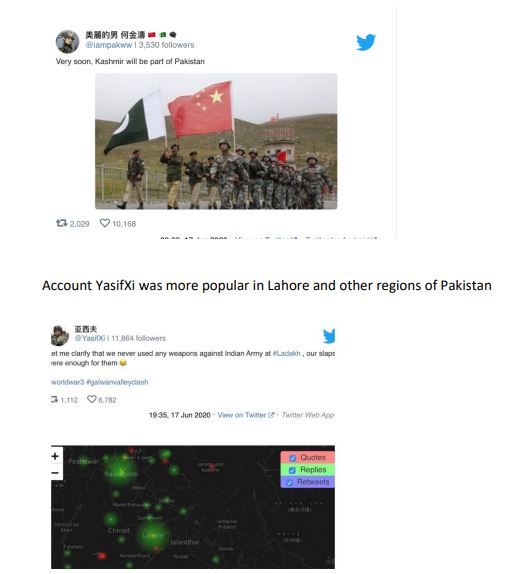 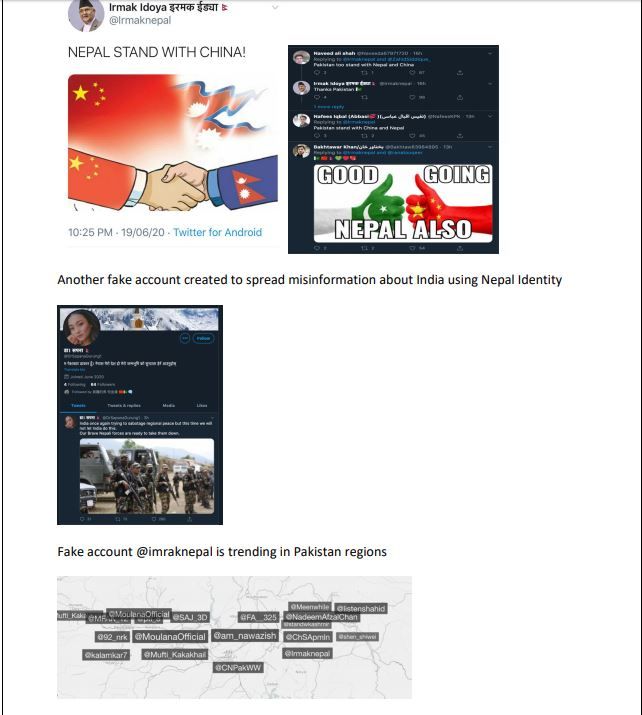 Twitter has been advised to monitor these kinds of accounts and ensure that they are removed with priority, as they seek to cause trouble for citizens. The report advises Twitter to deploy its fact-checking policies to ensure that the stories are marked as fake as they use in the US.

Technisanct CEO Nandakishore Harikumar speaking to Republic TV said, “The only way to get rid of these accounts is to keep reporting them. Recently, researchers from Europe have come out and said that China is using social media to counter the COVID outrage against the Communist Party of China. Government of India has to take a strong stand against Twitter to stop this.”

READ | What is the Hindi word for mask? Big B exults after finding, poses with Gulabo Sitabo one

ISLAMABAD: Pakistan on Tuesday summoned the Indian Chargé d’ Affaires to protest over the …